Boydstun last won the day on May 13

Premium Posts
Beauty - Francis Kovach
There is and I Am
Your Love of Existence
Thought's Living Existence
Mysticism - Kant and Rand
Reason / Intuition / Feeling
Soul, Structure, Struggle
From Integrity to Calculus
Integration in Rand - from integrity to calculus to Piaget, Montessori, and Helmholtz
Dewey and Peikoff on Kant's Responsibility
~~~~~~~~~~~~~~~~
My earliest writings were in the 1980's -- Political and moral philosophy, all published in the magazine Nomos.
The Moral Value of Liberty (1984)
Review of The Evolution of Cooperation (1985)
Rights, Games, and Self-Realization (1988)
Introduction / Part 1 - Rights against Personal Injury for Two in Isolation / Part 2 - Imperfect Rights in Land / Part 3 - The Just State / Freedom

---Followup to 1998 on its method of government funding: here.

I discovered Rand's philosophic writings in 1967 and found them mostly correct. The following year, a close college friend began reading Atlas. We became lovers in the summer of 1968 and continued together to his death in 1990.

Back in 1972 I had gotten on a train in Oklahoma with $84 dollars in my pocket, one briefcase, one suitcase, and one bicycle. I got off the train at Union Station in Chicago. It was Labor Day. I asked an attendant which direction was the lake. He checked my suitcase and bike for later pickup. I walked to the park, which runs along the lake, sat on a bench, and looked over my beautiful city. I bought a newspaper and landed a job as an unskilled laborer three days later. I called Jerry, told him I had $2.50-an-hour, told him to give notice at his job, and to come to Chicago. By a decade later, he was a practicing attorney, and I was a degreed, employed engineer.

While I was in engineering school at Illinois Institute of Technology, I worked as a co-op student at a locomotive factory.* I liked it very much, but upon graduation, I decided to work in nuclear power. I helped to complete the last plant that was built in America. It is still putting megawatts on the grid more than three decades later.

In the desolation of Jerry's death, I created Objectivity. It was a hardcopy, subscription journal of metaphysics, epistemology, and theory of value informed by modern science. All twelve issues (1990–98) are now available for free online at Objectivity Archive.

I am retired now from commercial work, but this other continues, this long keeping up with science and long study and writing of philosophy. Since January 2014, I have been writing a book on metaphysics, epistemology, and theory of moral value. In it I compose a new philosophy, cousin to Rand's, and I set both our philosophies in their relations to other philosophies from the Greeks to our own day.

When I visited the grave of my lover for the fifth year, I decided to try to make it all happen again. In 1996 I met Walter Klingler. We continue "two hearts beating each to each."

The Way We Were

Walter and I were married de jure five years ago in this room, our living room. That was exactly 20 years after the date we began our relationship. It had begun as "where have you been" and very soon turned to "in sickness and in health, for all of my days." 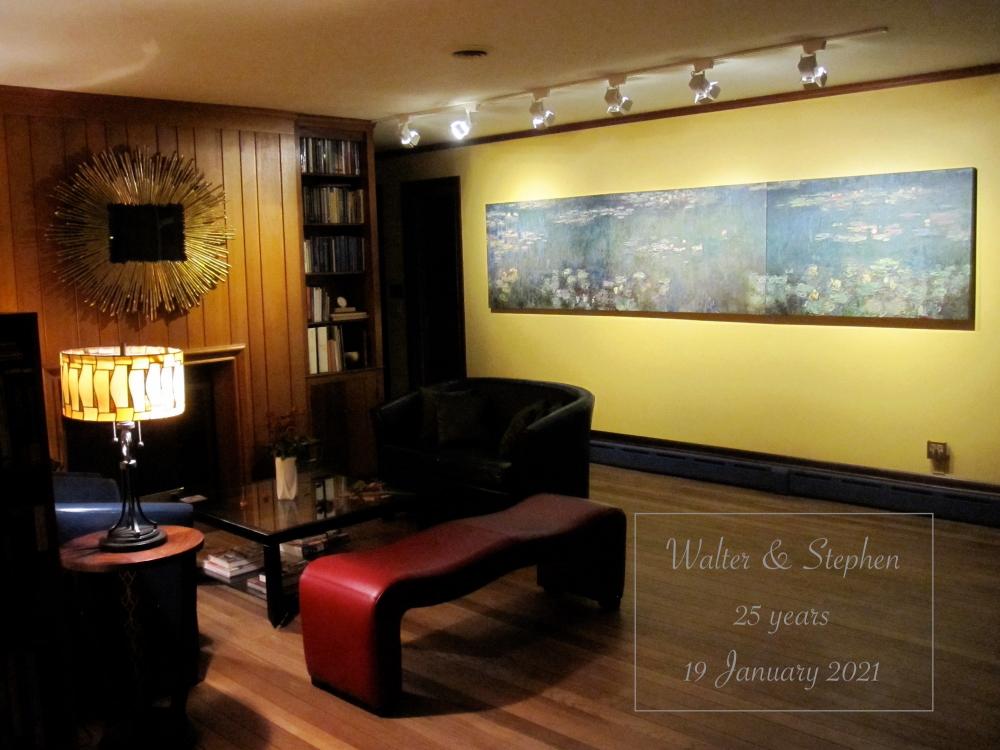